My journey began when I got a phone call that I've been accepted for the job I've applied for at FocusCura - a health innovation company - in the Netherlands as a senior iOS engineer. Excited to start a new adventure in my life yet conflicted for having to leave my family and friends behind, I shared the news, and submitted my resignation at Vodafone Egypt, and the exhilarating roller coaster began.

As it so happens, I was FocusCura's first international hire which meant they had to go through a lengthy process of getting approved by the IND (Expats Office) to be able to sponsor international talent from outside the EU, which took about 6 weeks! After which the approval process for my application started which took another 3-4 weeks; by that time I was starting to lose hope and the fear of being jobless started to creep in. Suddenly, in unsuspecting moment, the call came in, my application has finally been approved, and it's now time for me to schedule an appointment at the embassy to get the long term visa on my passport and start packing! I started saying my goodbyes and hard farewells to my loved ones. When it was time, my family dropped me off at the airport with watery eyes yet encouraging and incredibly supportive enthusiasm.

I landed in Amsterdam's Schipol airport not knowing what to expect, although I have visited Europe before, I've never been to the Netherlands until that moment and only knew what I've read online about it, as the land of the giants, smoking pot, thousands of canals, and everyone speaking good english. Of course after living here for 5 years I got to know that it's much more than that, which I'll tell you all about in this series of blog posts, so stick around ;)

Waiting for me at the Airport was my colleague and later to be friend Ruben with a pack of stroopwafels and a big smile to welcome me to the Netherlands. Ruben was my main contact throughout the whole journey from the moment I started interviews until I registered at the Gemeente (Municipality) Amsterdam and got my first residence permit. We figured a lot of things out together for the first time, we used to joke about how I'm FocusCura's guinea pig in reallocation and onboarding expats, honestly if it wasn't for his continued support through that insane roller coster I would have been lost.

It's my first day at work, I got up early, got dressed, and head out to commute to work for the first time, and that's when I learned my first of many hard lessons. 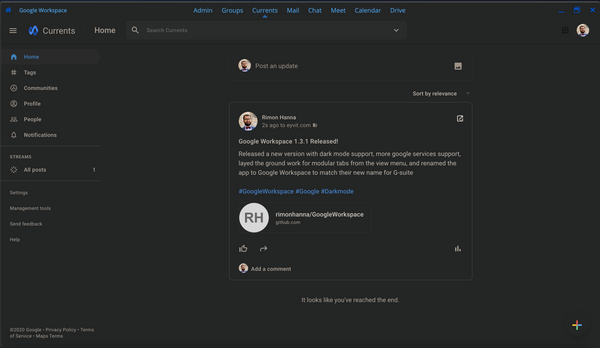 We use google workspace (formerly G-suite) at work and I was getting tired of having multiple tabs open for each google app, and every time I share my screen and